Enjoy these pokes at the powers that shouldn’t be.

Video of the Week

There is a new documentary about “The COVID” going viral called Died Suddenly by Stew Peters. The film has been watched almost eight million times on Rumble alone in less than a week.   The documentary presents true information wrapped in a blanket made of poo engineered to discredit the true information.  Here is your guide to understanding what is true and how the inter-generational organized crime system controls the opposition by leading it themselves.

Interview of the Week

Etienne de la Boetie2 on The Other Side of the News
Etienne joins the crew at The Other Side of the News to discuss the deliberate manipulations by governments and Big Pharma to hypnotize the masses with their creepy pseudoscience and religion to bring about their Eugenics Agenda.  Etienne delves into the shocking statistics behind the estimated 20 million dead globally and 2.2 billion injured by Covid “vaccines”, a number significantly greater than those supposedly killed by Covid 19.

Update on 5th Edition of “Government” – The Biggest Scam in History… Exposed! Investigation into “The Covid”

Book update:  We are still slamming and jamming to get the 5th edition of “Government” – The Biggest Scam in History to the printer by Monday Dec 5th while still making progress on Solving Covid… and getting out Five Meme Friday… and doing the occasional podcast to reach new audiences… and celebrating Thanksgiving…

I am sharing some of the new and improved memes from the upcoming 5ht edition this week to whet the whistle… more coming soon!

Latest Estimate: Book Should Ship to Printer by:
I am going to just quit making predictions! BUT  we are getting close… We are down to the last section of the book and laying out the new cover and interior.

64GB Liberator Coming – We are expanding: The Liberator to 64GBs.  Everyone who ordered the 32GB Liberator will get many additional GBs of material for free!

Funding: Since we only raised $20,000 ($15,250 from IndieGoGo and ~$4,750 in Epic Cash) of our $35,000 goal we are looking for a heavy hitter or two to help us get the book out in a BIG way.  If you or anyone you know might be interested then please e-mail me at Etienne@ArtOfLiberty.org where I can take you through the new edition and plans.

Free Download of the 4th Edition for IndieGoGo and Five Meme Friday subscribers – We are making the 4th edition of the book available for free download to our IndieGoGo backers, Five Meme Friday subscribers, and anyone who downloads the full Liberator.  You can find the 4th edition with all the hypertext links in the Liberator#1 Dropbox here: https://www.dropbox.com/sh/cocj4c4g4dge5ae/AAD989ik8cHQaoINjIrw9q3da?dl=0

The Liberator – Our archive of “government” and media criminality

Important Note: New additions are added to the authoritative Liberator Dropboxes regularly but will not appear in the physical credit card-sized flash drive until we launch the next version.  Anyone can download the current contents of the Liberator FOR FREE including all the primary sources and evidence from our investigation into “The Covid”.

Liberator #3 – Evidence that “The Covid” has been a scam and the vaccines are killing people: https://www.dropbox.com/sh/flf3694718or4tb/AADBa0rLhBC2hlbAH7uo3DE4a?dl=0

The White Rose Society is a decentralized group of 60,000+ activists around the world that make and distribute resistance stickers to “The covid” and organized crime government generally. Anyone can participate. All you need is a low-cost Brother QL-800′ label printer (~$100 new or cheaper on Ebay). Download their stickers archive for free and print and distribute whichever stickers strike your fancy for a very low cost.

You can get a sneak peek had a project the Art of Liberty Foundation will be launching soon entitled the White Rose MUCHO GRANDE where we will be making a file of free POSTERS to distribute that anyone can print on a large format printer plotter.. Looking for someone to host a gallery showing of the posters and film it… contact me if you are interested.  ArtOfLiberty.org/white-rose

You can get a sneak peek had a project the Art of Liberty Foundation will be launching soon entitled the White Rose MUCHO GRANDE where we will be making a file of free POSTERS to distribute that anyone can print on a large format printer plotter.. Looking for someone to host a gallery showing of the posters and film it… contact me if you are interested.  ArtOfLiberty.org/white-rose 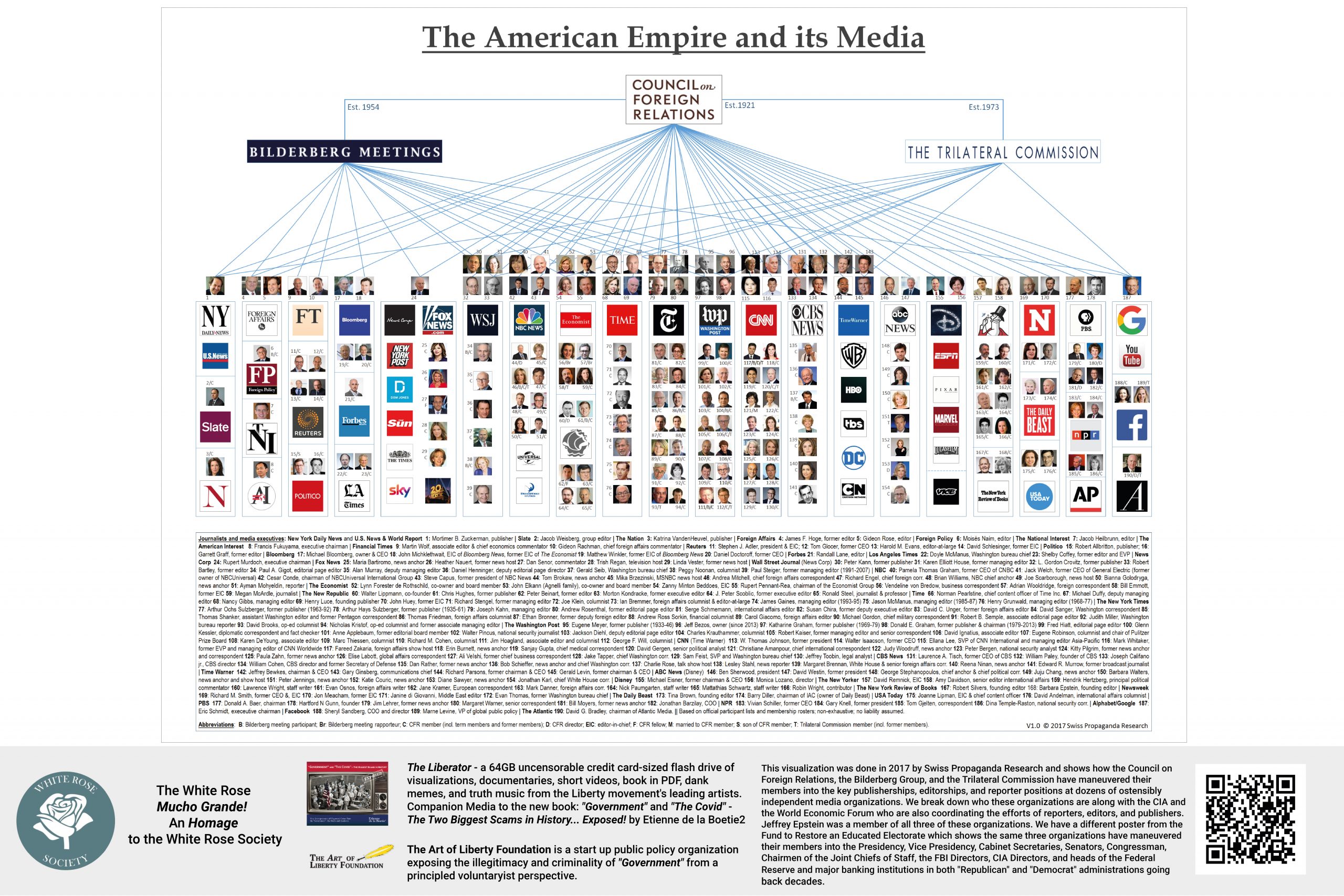 If you read Part 1 of the How BlackRock Conquered the World series, you will know how BlackRock went from an obscure investment firm in the 1980s to one of the most powerful asset managers in the world after the Global Financial Crisis of 2007—2008. You will also know how BlackRock’s CEO, Larry Fink, wasted no time in using the company’s immense riches—with over $10 trillion under management and a position as one of the top three institutional investors in seemingly every Fortune 500 company—to gain political power.

But Fink and his lackeys were not interested in accruing power merely for its own sake. No, the point of getting power is to use it. So the question is: how did they use this newly acquired political power?
Well, did you hear about a little thing called the COVID-19 pandemic? If you’re reading The Corbett Report, then you likely already know that the events of the last three years had nothing whatsoever to do with a virus. But if the pandemic was actually a scamdemic and it was never really about a viral contagion, then what was it about?

There are, of course, many answers to that question. The scamdemic served a number of agendas and the various players on the grand chessboard each had their own incentives for playing along with it. But one of the most important—not to mention one of the most overlooked—answers is that the scamdemic was, at base, a financial coup d’état. And that entire coup d’état was engineered by (you guessed it) BlackRock.

In Part 1 of this series, A Brief History of Blackrock, I described how BlackRock came to be the economic and political juggernaut it is today.
This week, I will explain how BlackRock’s Going Direct reset paved the way for the massive economic and monetary transition that we have just lived through under the cover of the scamdemic.

And in Part 3, I will examine the Aladdin system and the other creepy ways BlackRock is planning to use its power to mould society in its own interest.
Want to know the details? Of course you do. Let’s dive in.

Etienne’s note:  The James Corbett article above is one of the most important that I have ever read breaking down who was behind “The Covid”.  I believe that I was the first person to publicly identify “The Covid” as the engineered reason for the Fed to intervene in the ponzi scheme treasury market which I did in writing (our Plandemic expose) and on Beth Marten’s podcast in March and April 2020.  I didn’t realize just how right I was until I read the article above and watched this video by John Titus recommended in the article.

Executive Summary: In August of 2019 Blackrock wrote up a technical white paper essentially calling for unprecedented powers to be given to the Fed (and itself!) during the next economic emergency and then helped engineer the next economic emergency.  You can get to John Titus’s video: Larry and Carsten’s Excellent Pandemic here: https://odysee.com/@BestEvidence:b/larry-carstens’-excellent-pandemic:e

News of the Week

The G20 has issued a formal decree promoting vaccine passports as preparation for any future pandemic response in its final communique. Indonesian Health Minister Budi Gunadi Sadikin, speaking on the matter on behalf of the G20 host country, had earlier in the summit called for a “digital health certificate” using WHO standards.

Sadikin advocated for that he dubbed a “digital health certificate” which shows whether a person has been “vaccinated or tested properly” so that only then “you can move around”. Watch his comments during a G20 Bali panel discussion earlier in the week…
Continue Reading…

New WHO pandemic treaty in final stages, would overrule the US Constitution and unleash medical dictatorship, warns Dr. Francis Boyle

Today we bring you a truly bombshell interview and critical story about the WHO’s new pandemic treaty which is specifically written to overrule the United States Constitution and all domestic laws in every nation, worldwide. How do we know this? Because treaty expert Dr. Francis Boyle studied the proposed treaty language and lays it all out in today’s hard-hitting interview (see below). He’s the author of the Biological Weapons Anti-Terrorism Act of 1989, and an expert in reading and writing treaties. And today, he issues his strongest warning yet made public.

Dr. Boyle is the author of a recent book entitled, “Resisting Medical Tyranny,” and in today’s interview, he openly warns that this new WHO treaty — dubbed “WHO CA+” — is designed to unleash a global medical dictatorship that would overrule your local doctors, hospitals and clinics, forcing them to follow WHO directives on things like masks, quarantines, social distancing and economic lockdowns.
Continue Reading…

Have a Liberty event, group or meet-up that you would like featured in our calendar? Drop us an e-mail to: Events@ArtOfLiberty.org

Equally as interesting, in the top 10 for disability, the common denominator seems to be the states with the highest anti-“government” sentiment in the nation.  Wyoming was the runner-up in the Free State Project “Bake-Off” in 2003.  Idaho is the “Great Redoubt” where patriots and leave-me-aloners have been concentrating for decades.  Arizona and Nevada have huge anti-“government” populations.  Alaska, Maine and the Dakotas were also Free State Project runners-up.  It could be a complete coincidence but it sure looks like the organized crime “government” and their pHARMa partners tested their bio-weapons in the states most likely to rebel first as the understanding of the illegitimacy and criminality of “government” slowly and surely spreads.

The Everything Bundle – The Sampler of Liberty!
Give me Liberty… and give me more! The Everything Bundle includes the latest version of our flagship book on government, along with a collection of potentially life-altering introductions to anarchy, agorism and voluntaryism.

Are you Ready for Autonomy? Learn what the powers that shouldn’t be tried to hide from you. Reclaim your power, and change your life.